Summary: Background Regulated alteration of connexin expression has been shown to be integral to acute wound repair. Downregulation of the gap-junction protein connexin 43 at the wound edge has been correlated with keratinocyte and fibroblast migration, while abnormal overexpression of connexin 43 significantly perturbs healing, as shown in the streptozotocin diabetic rodent impaired healing model. Objectives To examine the protein expression levels of connexin 43, in addition to connexins 26 and 30, in a variety of human chronic wounds. Methods Wound-edge punch biopsies and a matched control from the arm were taken from a cohort of patients with venous leg, diabetic foot or pressure ulcers. Wound connexin expression in each patient was compared with that in a matched, nonwounded arm punch. Tissue was sectioned, stained and imaged by confocal microscopy using identical parameters per patient to permit quantification. Results Epidermal connexin 43, connexin 26 and connexin 30, and dermal connexin 43 were discovered to be strikingly upregulated in every ulcer from all three wound types, pointing to connexin upregulation as a common feature between chronic wounds. Conclusions This result supports efforts to target connexin 43 to promote cell migration and wound healing in chronic ulcers.

The American College of Hyperbaric Medicine 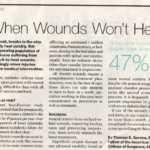